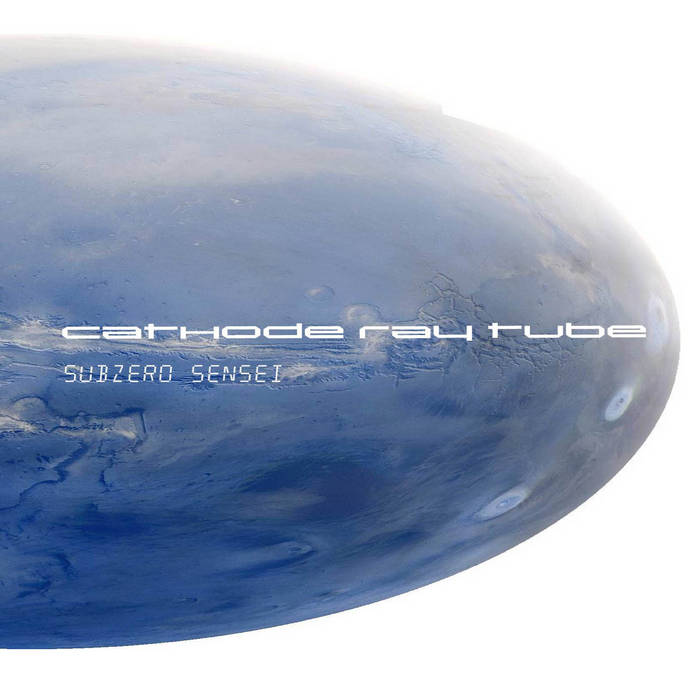 Especially tastey is the guitar on "All Day Sucker" that seems to hang in the air forever. "In "Old Organics" digital delays on everything construct a house of mirrors around a vocal sample. This CD makes you want to turn out the lighs light candles, but the final track Tremble's bleak rumble will make you want to turn them back on."

"Produced, composed and "recorded warts and all" by Charles Terhune (as cathode ray tube), these slightly-scuffed beatronic oddities line up like a collection of fascinating audio curios. A sense of computerized spaciness inhabits the soundworlds of subzero sensei.
Blink-and-you'll-miss-it D (0:06) opens the disc with its shimmery skein just before All Day Sucker stirs a string of crunchy little beats into a gloopy soup of swirly synth sounds. Simultaneously moody, spacy and energized, XA features brooding atmospherics and sibilant syncopation expanding into more orchestral/celestial sweeps and pop-pop-popping bassbeats.

Six "skits" fill the space between longer tracks, such as the rougher, more-experimental textures of Hair Dryer VS Fax Machine, the micro-electro-dance sounds of Conversation, the weird monster-voice of IDM or the caustic zones of LA Diva.

Drippy meets granular, then encounters groovy organ-like swoons and snappy beats in KAP_DWA... all of which unfolds over a spacious expanse. Pumped with steady rhythmic effects, the gleaming void of XA 2 is traversed by strange sonic ripples and staticy transmissions... strangely beautiful. 11 12

As if emitting general sci-fi spookiness from a vast cauldron, Tremble (14:56) smolders and boils, occasionally interjected with warbling soundstreams. After 5.5 minutes, a throbbing beat tops the muffled fury, later joined by a bobbing bassline as the backdrop evolves into a grumbling morass.
The liner notes say, "Mistakes are intentional and fun"... though I don't hear too many errors in subzero sensei; of course, with such eclectic material, who's to say if anything is "wrong"... It's certainly no mistake to recommend cathode ray tube's sound de/constructions to fans of rhythmic experimentationalism and intelligent electronic convolutions. These exploratory 8.5 soundscapes aren't so "challenging" as to be hard-to-listen-to."
- David J Opdyke, Ambeintrance

"On the inside of this release by Cathode Ray Tube lies the statement "Mistakes Are Intentional And Fun." While that might be a statement that sounds like more of a warning to some people, I actually thought it was pretty interesting. Not only is this an independent electronic artist, but instead of being a bit too highbrow about their music, they poke a bit of good-natured fun at themselves. While it may lead one to also believe that this album is full of technical glitches and just plain bad musicianship (which could then be explained away with that above statement), that's not the case either.

In fact, I'd never heard of C-Fom Records nor Cathode Ray Tube at all before this release. Like many people, Charles Terhune cranked out these tunes in relative obscurity, but damned if they aren't pretty good. Broken up into 16 different tracks, Subzero Sensei actually reminds me a lot of the older Warp Records release by Black Dog Communications entitled Spanners. While 8 of the tracks on the disc are actual pieces, there are also shorter pieces in-between each one of them (like the "Bolt" tracks on the aformentioned disc) called "Skits" that help set apart the tracks from one another. While the music isn't necessarily similar at all times, the album flows in sort of the same way.

Again, while I'm not sure if Terhune's influences are some of those early Warp releases (like Black Dog and B12), fans of that work would certainly do well to seek this disc out. "Kap Dwa" rolls along with some serious low-end rumble while some gurgling electronic sounds bubble over the top of it and "Xa" bangs out an almost abrasive beat under haunting synth washes. If you close your eyes and turn up "Old Organics" really loud, you'd swear that you'd just popped in the newest release in Warps "Artificial Intelligence" series circa 1994. Really, it's that good.

Probably the weakest spots on the disc are the tracks known as "Skits" that fall in-between the regular ones and range in time anywhere from 30 seconds to just under two minutes. While a couple of them work (the hilarious "Skit: IDM" has a computer voice belching out words while a chunky beat plays in the background), most of them simply don't develop into much. A couple tracks don't really hit on all cylinders, but when they do, this album is awesome. Just to make a point, things close out with the 15-minute long track "Tremble." The slowly-evolving track just keeps drawing you in further and further the longer it goes along and ends up feeling like a slightly less evil Leo Anibaldi track. Anyway, I hate to drop so many names in terms of references, but this is a small label artist doing some pretty good work. Good stuff on the small Boston label.
- almostcool.org

"Cathode Ray Tube is Charles Terhune (initials CRT). He is single handedly putting Somerville MA on the IDM map through his label (C-FOM = Chock Full Of Mercenaries) and his music. He is no stranger to electronic music, and knows that it is harder than ever to get noticed in the glutted electronica market. 'Subzero Sensei" floats above most electronic discs like Chow Yun Fat floated in the bamboo in Crouching Tiger. What I like about this CRT disc is how it brings you into the artist's life. There is water dripping in "Kap Dwa" (#8) and a little girl being put to sleep and later crying in "Infant, S Mos" (#15). I can picture these little things leaking into his subconscious as he worked in his home studio, eventually finding them almost unconsciously reflected in the completed work. I also love the track "XA 2" (#10), which was my favorite track in his recent show at the Gallery Bershad. "Old Organics" (#12) is somewhat of a headphone track with the movement of sounds between the speakers. The cement synth (the part that holds it all together) reminds me of the instrumental track which comes before "Time" on 'Dark side Of The Moon'. Whoa! Last of my four faves is the obvious choice: "All Day Sucker" (#2). It is 'immediate' and sucks you into the rest of the disc after the short intro that precedes it. Faves: 2,8,10,12 "
- Carl Thien, gullbuy.com